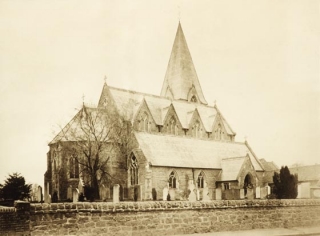 The Church after the rebuild 1862

It is believed that the origins of the church are in the 15th Century.  The earliest part that remains is the tower and the font.  The Victorian architects Hine and Evans rebuilt the rest between 1859 and 1860 after a fire, which destroyed the earlier, smaller building.

We can trace our history with the help of the board showing the vicars from 1529, which is on the south wall as you come into the Church.  It’s recorded that on the 15th June 1527 a church, or more likely, a Chapel of Ease, was consecrated on the order of no less a figure than Cardinal Wolsey.

However, these were troubled times as in September 1552 Edward VI ordered the removal of many of the furnishings.  An extract from a document of the times records:

Generations of worshippers have over the years contributed to the furnishings and beautifying of the Church.  The organ was the gift of the Misses Wilkins as was the carved screen in the West End.  The bells were re-hung in 1890 and again in 1933.  A sixth bell was given by Mrs Murdoch in 1974.

The chiming apparatus for the bells was a gift of Mrs. Cash and her son in 1909.  Benefactors, too numerous to mention by name, have provided stained glass windows, carpets, altar furnishings, line plate, flower stands, hymns books, tables and the old painting of Our Lord.  This hangs at the back of the church on the part of the original tower, which is now inside rather than outside!

In 1880 the Rev Whitelegge and his family gave the present clock “going eight days, having two days and striking the quarters”.  This has now been updated with an additional two faces to mark the Millennium.

The Local Government Act of 1894 changed the administration of parish affairs and the Churchwardens were no longer civil officers and only able to transact ecclesiastical business.

In 1982 the parish undertook a massive fund raising campaign to raise £60,000. Our efforts were rewarded. We were able to re-roof the Church, decorate, carpet and install new heaters.

To mark the millennium the church was fitted with floodlights and an exquisite quilt worked by ladies of the village depicting its history was given to the church and now hangs  on the north wall inside the church.