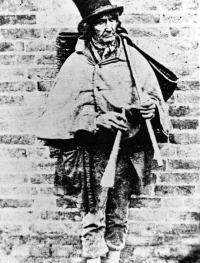 George Yates was the most famous blind person ever associated with Farnsfield.  He died aged seventy-seven in Farnsfield in 1866; he had been the village postman for thirty-two years.  His blindness had been caused when, as a shoemaker, he had run a bradawl into his eyes.
At eight o’clock every day he set off from Farnsfield to carry the outgoing post to Southwell; he picked up the incoming post on his way back.  He was never absent, never late, and only once forgot a package; on that occasion, pausing only for a glass of beer and some bread and cheese, he went straight back to Southwell.  He was trusted with thousands of pounds; he himself lent money but was not always repaid.
On the twenty-first anniversary of his employment he hosted a supper at the New Inn and helped to ring the church bells.  He walked an average of twelve miles a day.  No wonder his obituary in the Nottingham Review of March 1866 speaks of the difficulty of replacing him.

The quotation above is from “A HISTORY OF FARNSFIELD” by Mary Rigg and published by The Farnsfield Millennium Trust.

It is also believed that on his return to Farnsfield each day George Yates would blow his horn to announce the arrival of the post.  The inhabitants would then come to him to collect it.