The following is a list of some important buildings or structures which have made a contribution to Farnsfield’s history.

The old Jail House is situated on Mansfield Road and is currently used as a lockup by the Parish Council.

The old WI Hall on Quaker Lane is believed to be a former Quaker Meeting House.

Charnwood House on Main Street. This building was also believed to be a Quaker Meeting House.

The Village Centre in The Old Maltings on New Hill.

This building is the subject of strong speculation that it had ‘Royal Connections’. In the 1700’s it was rumoured that George 111 set up Lady Gertrude Savile in the house. In her book, “A History of Farnsfield”, local author, Mary Rigg, shows that this could not have been the case.

Buildings no longer in existence

The Old Station and Buildings on Station Lane. 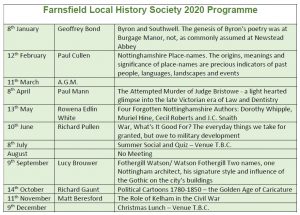