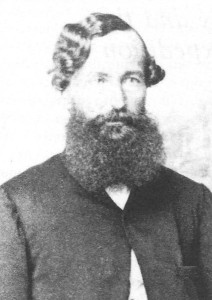 Francis Thomas was the third surviving son of Joshua and Frances Gregory,he entered public service in the Swan River Settlement in Western Australia in 1841 and became a staff surveyor in 1847.

In 1857 he explored the upper Murchison River and in the following year the country farther to the north and east.

He visited London in 1860 and having lobbied the under-secretary at the colonial office, one Chichester Samuel Fortesque, was put in charge of the expedition to explore the Pilbara region, inland from the north-west coast.

Francis left Fremantle on 23rd April 1861 and four days later at Champion Bay near to the site of the modern town of Roebourne he was joined by the rest of his party. The expedition returned to the coast on 17th October having discovered some excellent pasture land. Following his return by sea to Perth on 19th November 1861 Gregory estimated that there were two or three million acres in the district they had covered which were suitable for grazing, and he also drew attention to the possibilities of exploiting the pearl-oyster industry.

Francis Gregory was awarded the Gold Medal of the Royal Geographical Society in 1863.

He married Marion Scott Hulme on 11th May 1865 and they had five sons and one daughter. Descendents of their son, Francis Westbrook Gregory and his wife Jessie Cole now reside in Brisbane and Sydney.

Francis Thomas Gregory died at Harlaxton, Toowoomba, Queensland on 24th October 1888. Known as Frank, he was ambitious and less imperturbable than his brother Augustus and was once described as, “a smooth, not altogether trustworthy fellow”.

The Gregory name is widely commemorated throughout the Australian Continent.